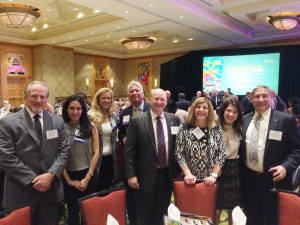 Cordia Partners was proud to help the Tech Council of Maryland celebrate their 28th Annual Industry Awards on May 11th, 2016.  The Tech Council of Maryland (TCM), Maryland’s largest technology trade association, announced the winners of the Industry Awards during a celebration at the Bethesda North Marriott Hotel & Conference Center attended by more than 600 technology and business leaders.

“The technology and life science communities in Maryland are rich with innovation and talent, which is epitomized in the winners of our 2016 Industry Awards,” Rene B. LaVigne, president and CEO of Iron Bow Technologies and TCM chairman-elect. “We are proud to honor our recipients for their accomplishments and, through all of our nominees this year, to showcase the impressive work that is being done across our state.”

A special honor – the Chairman’s Award – was presented to Novavax Inc. during the celebration.  The Chairman’s Award is given to a TCM member company or individual that best exemplifies excellence in Maryland's technology or life science industry to recognize the recipient for its contribution to the industry, through market success or job creation, and community involvement. Novavax was chosen for its enormous influence within the life sciences community and its commitment to maintaining a presence in Montgomery County. During 2015, the company rapidly progressed its experimental vaccine for the highly infectious respiratory syncytial virus (RSV), and received a grant of up to $89 million secured by the Bill & Melinda Gates Foundation to support the development of the RSV F Vaccine. Novavax also has expanded its workforce by 57 percent, with 442 employees. The company, which recently opened an R&D facility in Gaithersburg and is involved with the Corporate Volunteer Council of Montgomery County, has been recognized in the Deloitte Fast 500 and was named a Washington Post Top Workplace the last two years running. In 2015 Novavax also was recognized by the Alliance for Workplace Excellence and as a Baltimore Business Journal Top Biotechnology Companies.

Other awards presented during the 2016 TCM celebration were:

Tech Advocate of the Year
Rep. C.A. “Dutch” Ruppersberger (D-MD 2nd District)
Rep. C.A. “Dutch” Ruppersberger (D-MD 2nd District), a former Baltimore County Executive, was the first Democratic freshman ever to be appointed to the House Select Committee on Intelligence, and was named Ranking Member in 2011. During his time in Congress, Rep. Ruppersberger has been committed to ensuring that our intelligence community has the resources it needs to protect the country from terrorism and cyber attacks.

CEO of the Year – Life Science
Jack Khattar, President and CEO, Supernus Pharmaceuticals
Khattar is a life sciences industry veteran and a CEO whose college experience at the American University-Beirut was impacted by the Israel-Lebanon war. His vision, passion and commitment to positively changing and improving the lives of those afflicted with central nervous system ailments has led Supernus to success with drugs for epilepsy and Phase II ADHD.

CEO of the Year – Technology
Phillip Merrick, CEO, SparkPost
Merrick encourages his team to take on tough challenges and excel, which is evident in 2016.  SparkPost, a cloud email platform that offers scalable email deliverability services, expanded its technology offerings, saw significant additions to its customer base, and signed a strategic partnership agreement with HP. Under Merrick’s leadership, the SparkPost cloud email service has become the fastest-growing cloud email service, processing billions of email messages each month.

Financial Executive Officer of the Year – Life Science
Vit Vasista, CFO, REGENXBIO Inc.
As the third employee of REGENXBIO, Vasista’s knowledge of the REGENXBIO reaches far beyond his role as CFO. He was a major part of the company’s successful IPO and has provided leadership as REGENEXBIO has developed products, attracted new investors, and brought in top talent.

Financial Executive Officer of the Year – Technology
Melissa Hook, CFO, Aquilent
Aquilent is a solution provider of digital services, DevOps and cloud services for the federal government. Hook’s disciplined growth, disciplined budgeting philosophy has enabled her to successfully oversee the company’s growth from $77 million to more than $106 million. She has successfully implemented a new budgeting and forecasting system and has kept Aquilent strong in cash flow, profit and revenue growth. She also personally oversees the AquilentCares Program, which helps employees give back to the community, and serves as a mentor to women in her company.

Life Science Company of the Year
Immunomic Therapeutics, Inc.
Immunomic is a clinical stage biotechnology company pioneering the study of the LAMP-based nucleic acid immunotherapy platforms. A successful clinical trial resulted in Japanese pharmaceutical company Astellas Pharma purchasing Immunomic’s technology, which was originally licensed from Johns Hopkins University, for $300 million. Immunomic’s has achieved success with an investor-focused strategy that creates returns in a short timeframe. The company hopes to have regulatory-approved products in pollen allergy, food allergy, cancer and animal health by 2020.

Technology Company of the Year
ZeroFOX
ZeroFOX protects against threats on social media and digital channels. During the last two years, the company raised $40 million, including $27 million in a Series B venture round. In 2015, ZeroFOX expanded globally, with launches in Canada, Europe, Latin America and Asia, and products available in multiple languages. The company also hired a new executive team, finalized partnerships with HootSuite and FireEye, and was named one of Dark Reading’s Top 20 Cybersecurity Startups to Watch in 2016 and DC Inno’s Top 10 Maryland Startups to Watch in 2016.

Government Contracting Company of the Year
Attain
Attain is a $94 million company that was spun out of Bearing Point seven years ago. Unlike traditional government contractors, Attain has an open and collaborative culture and is committed to charity is noted in their work with NIH Children’s Inn, The Women’s Center, National Kidney Foundation, Potomac Watershed Clean Up and the American Red Cross.

Emerging Company of the Year – Life Science
BrainScope Company, Inc.
BrainScope is the creator of a product that enables users to rapidly diagnose head trauma with a portable appliance. The company’s technology is on track to be the first fully FDA-cleared, integrated and objective system used to immediately assess patients for all forms of traumatic brain injury – from concussions to bleeds in the brain. BrainScope’s technology was showcased in March at the NFL Annual Meeting, and it is both an original recipient and Grand Prize Winner of the Head Health Challenge I, part of the Head Health Initiative, which is a collaboration between the NFL, GE and Under Armour.

Emerging Company of the Year – Technology
Lotame
Lotame is the universal cross-device data management platform that helps enterprises to deliver more relevant content, products and services. The company grew from $20 million in 2014 to $31.2 million in 2015 and raised $10 million in February in its last venture round of capital. 2015 also saw the addition of several marquee clients, including Infogroup, Advance Media, Neustar, EA Sports, Visio and The Weather Company, which is owner of The Weather Channel.

Cordia Partners is a leading provider of outsourced accounting solutions, business advisory, recruiting & staffing, and executive search services in the DC Metro area.  Our proactive, client-centered approach allows you to focus on your core competencies, and, ultimately, the overall success of your business.  With offices in Northern Virginia, Maryland, and DC, we are here to support the growth of your business.